Please take a moment to fill out this survey on your gaming habits!

Classes represent your character's specialization. Choose your armour carefully, as they all have their own weaknesses and strengths!

An armour class defines the grade of the suit worn by a space pioneer. Different armour classes provide different attributes, and can be used to fit different archetypes. There are currently three armour classes in the game: the light armour, the standard armour and the heavy armour.

Armours are protective equipment worn by all pioneers, which serve the dual purpose of protecting the wearer from both environmental (lack of oxygen, intense heat, etc) and physical damage from potential enemies. They also serve as a way to recognize agents when they are deployed on mission, as all armours display the trademark orange and purple colours of the Space Pioneers - thus achieving both an identification purpose (avoiding friendly fire) and a brand image purpose, spreading the pioneers name far and wide throughout the galaxy. Alternative colours schemes can be seen during official deathmatches to differentiate between different players.

Space pioneer armours are standardized in three main line frame sizes, each fitting a specific role (described below). Each frame comes equipped with a different array of functions fitting to the wearer's main task. Due to this distinction, the name of the frames ("heavy", "standard" and "light") is often used not only to describe the armours, but also the main responsibilities of the pioneer wearing the armour; for instance, "lights" are very likely to be acting as reconnaissance operatives.

While space pioneer armours are custom painted and adjusted with special skills modules, they are in fact simply slightly modified models of the mass-produced, standard military issue Equinox armour frames which are widely distributed in Galactic Federation territories.

Each armour class provides a different set of attributes. The most noticeable one of these attributes is the difference in skills available for each armour class. The different perks provided by these passive skill boosts make for different archetypes, making an armour class more suitable to specific situations, and less in others. While all amour classes are unlocked by default, their skills must be upgraded separately, even if some classes have a few skills in common. Each armour class also possesses two co-op skills, which will provide passive boosts to allies during co-op events. For instance, the heavy armour's guardian ability provides an energy shield to all teammates.

Stats are a self-explanatory perk of different classes. Each armour class provides a different base value of health points and movement speed. They also scale at different rates.

Finally, each armour class possesses its own unique robot companion with slightly different abilities, and has its own preferences of specialist weapons.

The light armour favors speed over any other attribute, though it also boasts very respectable damage. However, its low hitpoints and terrible damage resistance make it a bit of a glass cannon. 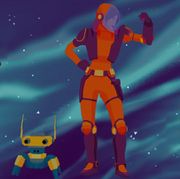 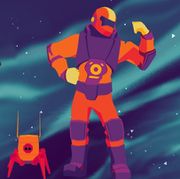 The heavy armour is the very definition of a tank. Its reinforced defenses allow it to soak and even negate an incredible amount of damage, and its specialist weapons are all geared toward crowd control. It is however extremely slow. 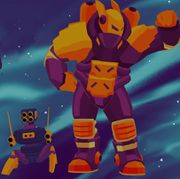